I entered the Catholic Church on April 3, 2010. I was baptized, confirmed, and received First Communion during the Easter Vigil.

I come from a wonderful family, and I grew up on the west coast of Canada. Yet, I never knew or heard about God or Christianity in a positive way until I was in university and moved in with a Catholic roommate. Up to that point, I considered myself an agnostic bordering on atheism.

The roommate was a seemingly normal guy, but to my shock he was on fire with a love for God. He quickly dismantled my false notions of Christians, and I found myself intrigued and at the same time confused by the Catholic faith. I began a three-year process of asking the tough questions while examining what I really believed.

Near the end of those three years, I attended a conference for Catholic university students. To be honest, I didn't want to go. But someone paid for me, saying the conference would change my life.

I accepted the money and went skeptically.

One evening during the conference, there was a night of adoration before the Blessed Sacrament. It was during that night that I gave the Lord the ultimatum: "God, if you are real you need to show me, or I am out. You had your chance!"

Instantly, the Lord responded in power and I felt waves of joy, love, peace, and warmth throughout my entire body. I was baptized in the Holy Spirit before ever being baptized. I instantly knew that God was real, that Jesus died for my sins, and he had a definite plan for my life. It was as though the lights came on. Jesus brought my heart to life.

I knew I had to become Catholic and so I went through RCIA that year. My whole perspective on life changed. I no longer wanted to pursue a career in forestry, which is what I studied during university. I decided I wanted to spend the rest of my life serving God.

I signed up as a missionary with NET Ministries of Canada for a year (netcanada.ca), and I fell in love with sharing the faith and seeing others encounter God. After the year was over, I started to discern the priesthood. While initially I was terrified, I began to find a great peace and love at the thought of being a priest. I first looked into diocesan priesthood but soon felt the Lord calling me to discern religious communities.

That is when I discovered the Companions of the Cross. After many visits, I was accepted by the community in 2012 and began my studies at Sacred Heart Major Seminary.

I encountered the Lord and his immense love as a result of my roommate who dared to share his faith with me. Because of him, I was able to receive the faith and pass it on to my parents, who themselves became Catholic in 2012.

The Lord has convicted me to spend the rest of my life evangelizing. He has called me by name, and he is calling me to be a priest after his own heart, a priest within the Companions of the Cross. 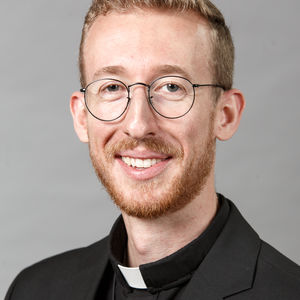 Marcus Schonnop is a second-year theology student for the Companions of the Cross.
Related Posts