The Work of Vocations in the Church

“The vocation is truly a treasure that God places in the hearts of some men, chosen by Him and called to follow Him in this special state of life. This treasure, that must be discovered and brought to light, is not made to ‘enrich’ someone alone. He who is called to the ministry is not the ‘master’ of his vocation, but rather the administrator of a gift that God has entrusted to him for the good of all the people, or rather for all humanity, even those who have drifted away from religious practice or do not profess faith in Christ.” — Pope Francis, Audience with Plenary Assembly of the Congregation for the Clergy, Oct. 3, 2014

God entrusts the treasure of the priesthood to the men he calls to serve him, his Church, his sons, and his daughters. Nurturing and supporting this vocation is the privilege and responsibility of all Catholics, laity, and religious alike. In particular, archdiocesan leaders and vocation directors are called to journey with men in their discernment of the priesthood. The work of vocations in the local and universal Church is essential to uplift the priesthood and cultivate the hearts and minds of men who choose to answer God’s call.

This work is at the heart of our mission at Sacred Heart and in the Archdiocese of Detroit. We are blessed to share this mission with the dioceses and religious orders in the United States and beyond. Father John Whitlock, Director of Vocations for the Diocese of Lansing, and Father Lawrence Hyginus, Director of Vocations for the Companions of the Cross, shared their approach to supporting discernment of the priesthood in their communities.

“Prayer is critical to the fostering of vocations,” said Father John Whitlock. He explained that the Diocese of Lansing invites parishioners to pray for seminarians in their bulletins, social media, posters, prayer cards distributed to their parishes, schools, and adoration chapels. “I am a strong believer that the Lord will give the Church more priests and religious if we really want them; that is, if we pray fervently for this grace,” he explained.

The Companions of the Cross take a similar prayerful approach. Father Lawrence Hyginus shared that the order’s founder Father Robert (Bob) Bedard had fallen away from consistent prayer until he experienced a renewal after receiving a prayer for the baptism of the Holy Spirit at a charismatic prayer meeting. “Fr. Bob specifically asked for the ‘gift of prayer’ and the very next day, he woke up with a ‘burning desire to pray,’” said Father Lawrence Hyginus. “This transformed the course of Fr. Bob’s life and ministry as a priest.” Prayer continues to be a pivotal part of their daily life and discernment. 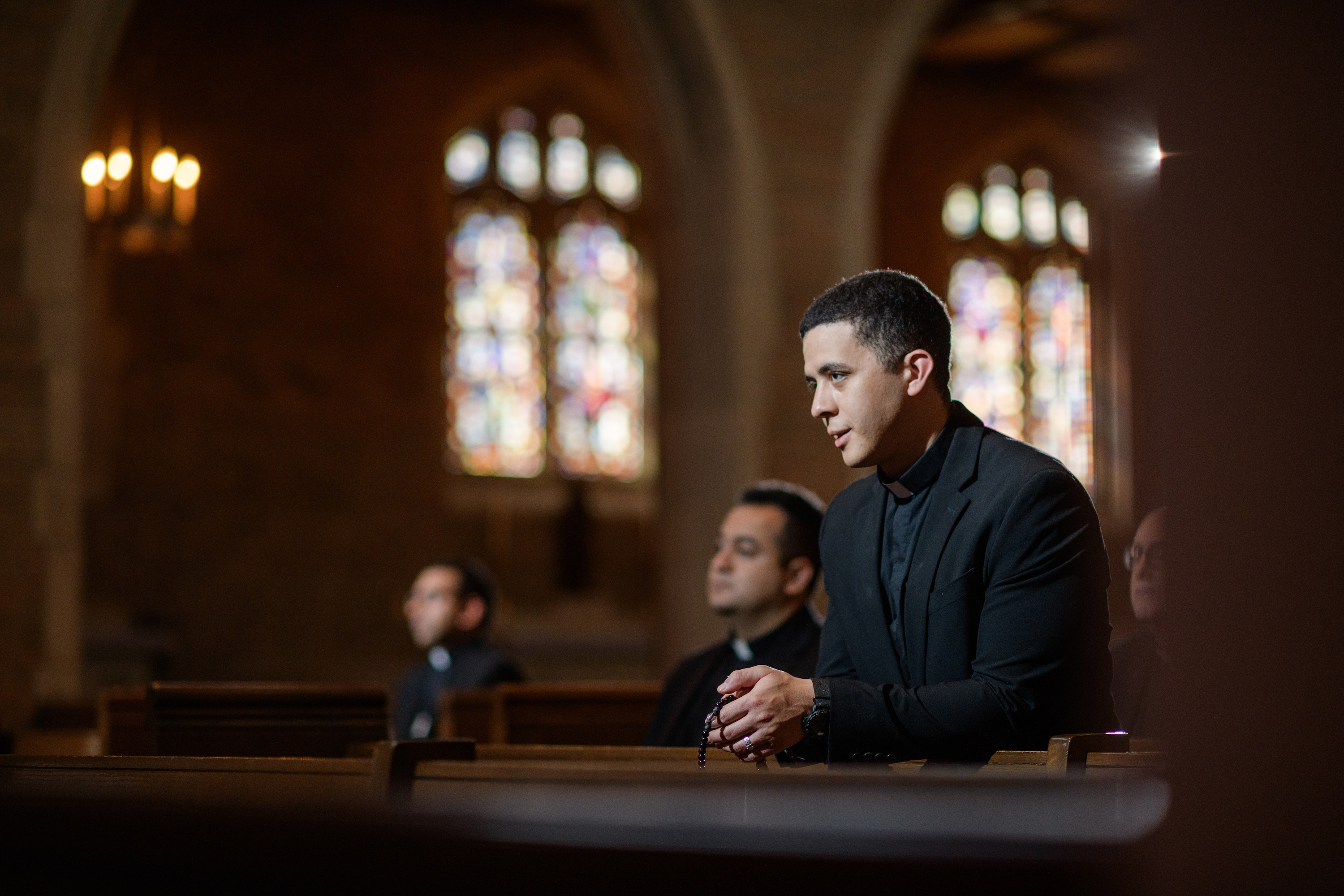 The in-person experience is core to vocational discernment, allowing men to preview the lifestyle of the priesthood and learn from current priests and seminarians. “We try to offer many opportunities for vocational discernment in the Diocese of Lansing. We have a number of discernment groups that meet throughout the diocese for men in high school and those in college and beyond,” shared Father John Whitlock. Each year, the diocese hosts annual “come and see” weekends at the seminary for both the college and major seminary level. The young men are also invited to a dinner where they have the chance to meet the current seminarians and the bishop. Father John Whitlock expanded, “We are also very intentional about summer placements of seminarians at parishes, so that young men in the parish have the opportunity to meet seminarians.”

Focused on the individual

When it comes to discernment, there is “no one-size-fits-all” approach, explained Father John  Whitlock. As he gets to know each man, he asks about his background, his discernment so far, what his life of faith looks like, and answers any questions he may have. He also tries to connect him with a discernment group for peer support. This personal attention allows the men to discern at the pace that’s right for them.

Father John Whitlock continued, “If, after an appropriate period of discernment (which varies with each candidate), he desires to go to the seminary and I assess that seminary would be the best next step for him, I invite him to apply.” Since the application process is lengthy, it is also a period of discernment. Among many other requirements, candidates must complete a psychological evaluation and a background check. They participate in a series of meetings with a lay and ordained board and lastly, meet with the bishop.

By catering support for each man based on their unique background and phase in the discernment process, candidates for the priesthood receive the mentorship and experience needed to make a prayerful and informed decision. 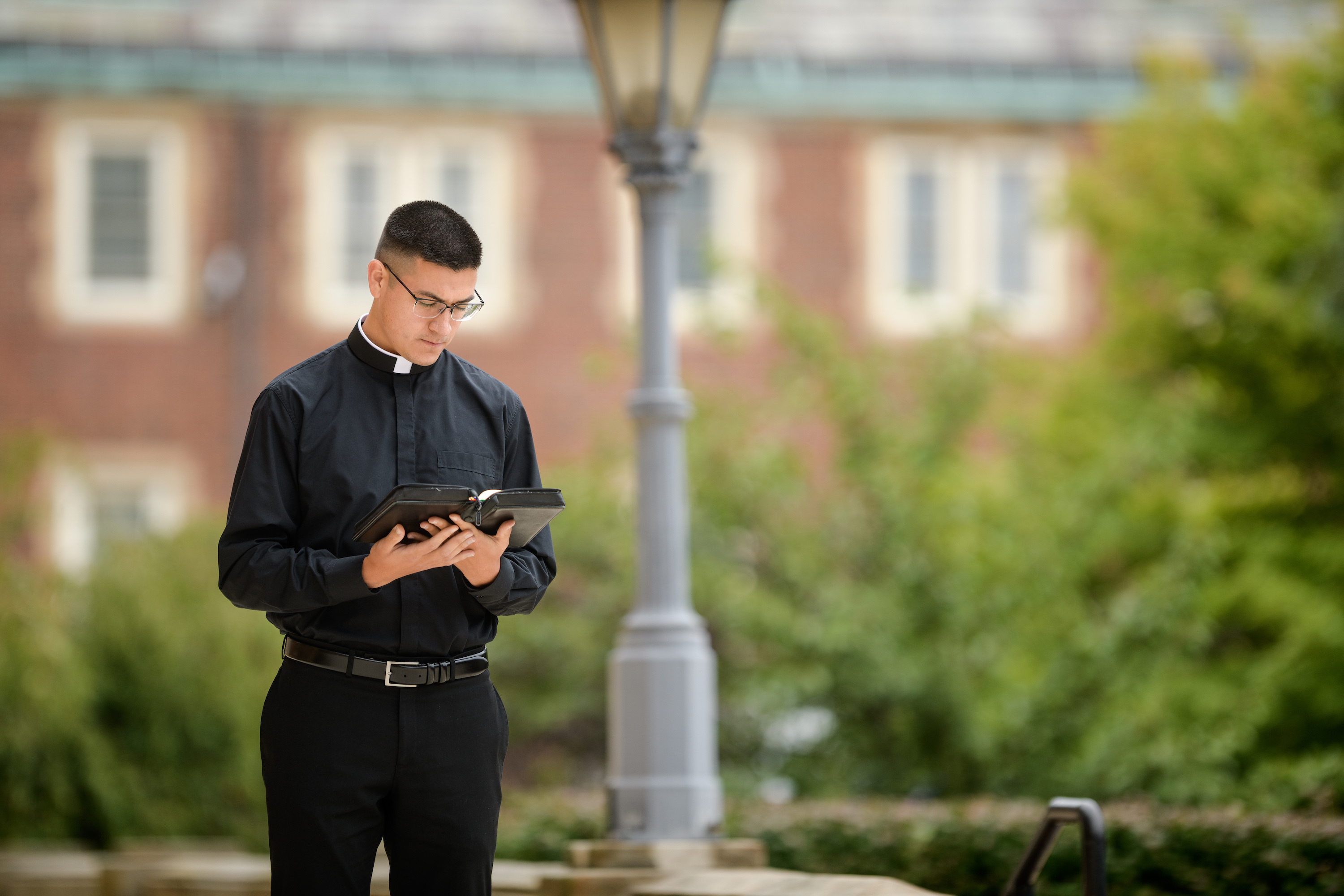 Building a culture of vocations

The work of vocations within the Companions of the Cross and the Diocese of Lansing helps build a culture of vocations in their faith communities. Father Lawrence Hyginus mentioned that it began with the order’s founder Father Bob Bedard who experienced a “conversion from churchman to intentional disciple.” In doing so, he set the example of renewal and service which are critical elements of discerning the priesthood. Father Lawrence Hyginus cited St. Paul in Romans 12:2, NRSV, “Do not be conformed to this world, but be transformed by the renewing of your minds, so that you may discern what is the will of God—what is good and acceptable and perfect.”

This focus on nonconformity is a tenet of the Companions of the Cross, their culture, and evangelization work. Father Lawrence Hyginus explained, “Our secular culture values style over substance, personal charisma over personal character. These trends risk negatively influencing the life of the Church and her leaders. Seminaries ought to be vigilant lest they produce ‘churchmen’: men who simply work for the Church without zealously buying into her mission of evangelization, rather than intentional disciples of Jesus Christ.”

Vocational discernment should be encouraged at all ages to allow Catholics, young and old, to be attuned to God’s will for their lives. In addition to supporting those who proactively seek direction in their discernment, the Diocese of Lansing makes “vocation visits” to all their Catholic schools. Father John Whitlock shared, “Our seminarians serve the major diocesan liturgies so that they remain visible to our people. Our parishioners and the Knights of Columbus are very generous in financially supporting our seminarians and their education, for which we are deeply grateful.”

By fostering priestly vocations, the Church not only guides the men chosen to answer their God-given calling but also ensures the Church and her people continue to benefit from the service, leadership, and faith of the priesthood. The priest, in practicing and upholding the sacraments, brings Christ to all those he serves. Let us always pray for those who have entered this holy state, those who are discerning, those who are struggling to answer the call, and those who guide them. The work of vocations in the Archdiocese of Detroit, the Archdiocese of Lansing, the Companions of the Cross, and beyond allows men to understand how the priesthood will transform their lives, and in doing so transform the lives of so many others, leading them to peace in Christ.

Fr. Burr reflects on the the life of discipleship and its impact on seminary life and formation.