What does the Catholic Church teach about the Eucharist?

Dr. Fastiggi offers scriptural and historical evidence to highlight the key points to understanding and witnessing Christ’s real, true presence in the Eucharist

The Pew Research survey shows that most of the Catholics who believe that the Eucharist is only a symbol don’t know the church’s teaching on transubstantiation. For those who attend Mass only monthly or yearly, only 23 percent know the church’s teaching on transubstantiation, and this percentage goes down to 10 percent for those who seldom or never attend Mass. All of this shows how important it is to have a clear understanding of what the church teaches about the real and substantial presence of Christ in the holy Eucharist.

We first need to understand that the truth about the holy Eucharist comes from Christ. It is not something the church made up. Support for the real, substantial presence of Christ in the Eucharist is firmly supported by Scripture, as well as by tradition, and the magisterium of the Church.

There are multiple prefigurements of the Eucharist in the Old Testament. God fed the Israelites with manna in the desert (Ex 16: 4–35). Jesus refers to the manna in the desert in his Bread of Life discourse (Jn 6:49), but Our Lord reminds us that he is “the living bread that came down from heaven” and the bread that he gives is his “flesh for the life of the world” (Jn 6:51). The Old Testament also anticipates the real presence of Christ in the tabernacle. In 1 Kings 8:10–13, we are told how the shekhinah—the glorious presence of God—came to dwell in the holy of holies in the Temple.

The Old Testament also prefigures the Eucharistic sacrifice, especially in the immolation of the paschal lamb (Ex 12:3–10). In Eucharistic Prayer I—the Roman Canon—the priest asks God to accept the offerings of the Mass “as once you were pleased to accept the gifts of your servant Abel the just, the sacrifice of Abraham, our father in faith, and the offering of your high priest Melchizedek, a holy sacrifice, a spotless victim.” In other words, all the offerings of the Old Covenant were pointing to Christ who is the Lamb of God who takes away the sins of the world (cf. Jn 1:29). Christ is “this pure victim, this holy victim.” The Eucharist is “the holy Bread of eternal life and the Chalice of everlasting salvation.” The Mass as a sacrifice was prophesied in Malachi 1:11, which proclaims that “from the rising of the sun, even to its setting, my name is great among the nations; and everywhere they bring sacrifice to my name, and a pure offering.”

This pure offering is the sacrifice of Christ. During the Mass, Christ is not re-sacrificed or put to death again. As the Council of Trent teaches, Christ’s sacrifice on Calvary is made present—re-presented—at every Mass: “the same Christ who offered himself once in a bloody manner [cf. Heb 9:14, 27f] on the altar of the Cross is contained and offered in an unbloody manner… For, the victim is one and the same; the same now offers himself through the ministry of priests who then offered himself on the Cross; only the manner of offering is different” (Denz.-H, 1743). Every Mass makes present the redeeming sacrifice of Christ. This is why Vatican II teaches that “as often as the sacrifice of the cross in which Christ our Passover was sacrificed (cf. 1 Cor 5:7) is celebrated on the altar, the work of our redemption is carried on” (“Lumen Gentium,” 3).

The New Testament provides unmistakable witness to the real substantial presence of Christ in the Eucharist. At the Last Supper, Jesus takes the bread, blesses it, and gives it to his disciples saying: “Take and eat; this is my body” (Mt 26:26; cf. Mk 14:22 and Lk 22:19). Jesus does not say this represents my body or this is a symbol of my body. Instead, he says: “this is my body.” When he takes the chalice and asks his disciples to drink, he says: “this is my blood of the covenant, which will be shed on behalf of many for the forgiveness of sins” (Mt 26:27; cf. Mk 14:24 and Lk 22:20). Again, we see that Jesus does not say this is a symbol of my blood, but this is my blood. In Jn 6:54 Jesus tells his disciples that “unless you eat the flesh of the Son of Man and drink his blood, you do not have life within you.” Many of his disciples left because they could not accept this hard saying (Jn 6:66). St. Paul hands on this teaching of the Lord in 1 Cor 11:23–32, and he makes it clear that we must discern Christ’s body in the Eucharist or bring judgment on ourselves (cf. 1 Cor 11:29).

The real presence of Christ in the Eucharist is testified by all the Fathers of the Church. St. Ignatius of Antioch (d. ca. 107) speaks of the Eucharist as “the Flesh of Jesus Christ” and “his Blood” (“Letter to the Romans,” 7). St. Justin Martyr (c. 100–165) says that “the food over which thanks has been given by the prayer of the word that is given by Him … is the Flesh and Blood of the same incarnate Jesus” (First Apology, 66).

The Eastern Fathers spoke of the bread and wine undergoing a change (metabollo) or a remaking (metapoiei) into the body and blood of Christ. In the sixth century, Leontios of Jerusalem used the term transubstantiation (metousiosis) in reference to the change of the water into blood in Exodus 7:17, but it was only in the twelfth century that Roland Bandinelli (c. 1105–1181) and Alan of Lille (c. 1116–1202) spoke of the Eucharistic change as transubstantiation. The ecumenical council, Lateran IV, of 1215 teaches that the body and blood of Jesus Christ are truly contained in the sacrament of the altar under the appearances (sub speciebus) of bread and wine, the bread being transubstantiated (transsubstantiatis) into the body by the divine power, and the wine into the blood” (Denz.-H, 802).

The Council of Trent reaffirms this teaching in 1551 and states that the change of the bread and wine into the substance of Christ’s body and blood has been “fittingly and properly named transubstantiation” by the Catholic Church (Denz.-H, 1642, 1652).  Trent condemns those who deny “that in the sacrament of the most holy Eucharist the body and blood, together with the soul and divinity, of our Lord Jesus Christ and, therefore, the whole Christ is truly, really, and substantially contained” (Denz.-H, 1651; cf. 1636 and 1640). Trent also teaches that “the whole Christ is contained under each species and under each part of either species when separated” (Denz.-H, 1653). Moreover, after the Mass, the substance of Christ’s body and blood remains in the consecrated hosts and particles (Denz.-H, 1654), and Christ is to be adored in the Sacrament with the worship due to God (Denz.-H, 1656).

As a result of transubstantiation, the species of bread and wine undoubtedly take on a new signification and a new finality, for they are no longer ordinary bread and wine but instead a sign of something sacred and a sign of spiritual food; but they take on this new signification, this new finality, precisely because they contain a new "reality" which we can rightly call ontological. For what now lies beneath the aforementioned species is not what was there before, but something completely different; and not just in the estimation of Church belief but in reality, since once the substance or nature of the bread and wine has been changed into the body and blood of Christ, nothing remains of the bread and the wine except for the species—beneath which Christ is present whole and entire in His physical "reality," corporeally present, although not in the manner in which bodies are in a place (Denz.-H, 4413).

The holy Eucharist is not simply bread and wine invested with a new significance and new finality. After the consecration at Mass, only the appearances of bread and wine remain. The substance or reality of the bread and wine becomes the body, blood, soul, and divinity of our Lord Jesus Christ. In holy Communion, we receive Christ whole and entire. This is our Lord’s great gift to us. This is his way of remaining with us, nourishing us, and uniting with us. The Eucharist is truly a miracle. The laws of physics and chemistry cannot explain the mysterious change of the substance or reality of bread and wine into the body, blood, soul, and divinity of Christ. This marvelous change is brought about by the power of God. As Catholics, we must never lose faith in the most holy Eucharist. We must have the same faith as the three shepherd children of Fatima, who, in the autumn of 1916, memorized a prayer taught to them by an angel, which begins:

O Most Holy Trinity, Father, Son, and Holy Spirit, I adore Thee profoundly. I offer Thee the most precious Body, Blood, Soul and Divinity of Jesus Christ, present in all the tabernacles of the world. 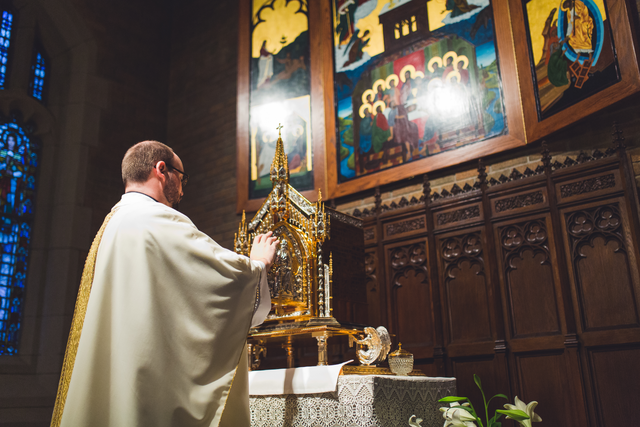 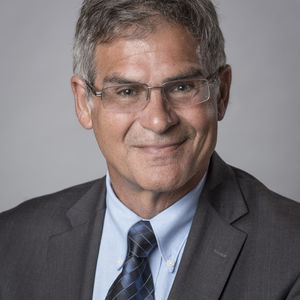