"A Light to Our Community"

onversing with Dr. Ilaria L.E. Ramelli is like following a high mountain stream: at first, there is the bubbling rivulet, then the rapid cataract and, finally, the reflective pool. Her voice immediately welcomes her visitor with a light and joyful tone. Her faculty colleague at Sacred Heart, Fr. Daniel Jones, speaks of her "ebullient, joyful personality" as a "light to our community, an enormous witness" to her faith in the "living sacrifice of which St. Paul speaks in Romans 12:1-2."

Indeed, it is clear that Dr. Ramelli has been following the light of truth to "discern what is the will of God, what is good and pleasing and perfect." Since childhood she has suffered progressive scoliosis and immune deficiencies that compromise her physical strength and ability to stand, walk, even sit, or combat infection. Nevertheless, she thinks of her accomplishments a "witness to the saving blood of Jesus."

Dr. Ramelli speaks of her formative years in which she witnessed the profound and simple faith of her parents' mothers, her "spiritual grandmothers." Her parents gave her the name of St. Hilary of Poitiers, a fourth century Father and Doctor of the Church. Because of her condition, she relied on her father Roberto to transport her and to guarantee that she received the education needed for scholarship. She speaks reverently of his devotion to her and of her loss when he died when she was sixteen. After her father's death, Dr. Ramelli devoted her life to Jesus through study and prayer as a consecrated virgin.

Her accomplishments, which Dr. Ramelli rushes over like the mountain cataract, were achieved during intense scholarly work over two decades and brought her to Sacred Heart, where she is Bishop Kevin Britt Endowed Chair in Dogmatics/Christology. Her curriculum vitae exceeds two hundred pages; she has directed international research projects; served on boards of scholarly journals; taught courses and delivered lectures in prestigious universities in Europe, America, and Israel. In 2013, her monograph, The Christian Doctrine of Apokatastasis: A Critical Assessment from the New Testament to Eriugena was published. The first systematic scholarly study of the history of the Christian doctrine of apokatastasis (i.e., restoration to an original state), it surveys the writings of the New Testament as well as the Fathers from Origen of Alexandria to Johannes Scotus Eriugena, the last patristic philosopher.

Citing her impairment, Dr. Ramelli notes that she requires an inordinate amount of rest, which she accepts as a gift, saying, "My body insists that I be quiet, so Jesus can teach me to pray." When asked about her aspirations for her work at the seminary, she expresses her ambition to see the emphasis on patristics develop into the establishment of a doctoral program. Such a step would mean an even stronger New Evangelization program because, as Dr. Ramelli observes, after the Apostles, the Fathers were the formative evangelists of the Church during its first thousand years.

Most of all, Dr. Ramelli is happy with the friends she has made in Detroitthe seminarians, lay students, priests, and faculty members with whom she feels the unity of those devoted to the work of Jesus. Her greatest hope is that people will not remember her disabilities as much as they see her as witness to the redemptive work of Jesus. 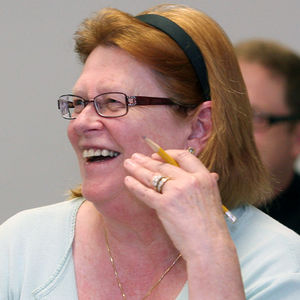 Martha Demerly graduated from Sacred Heart with an MA in Theology. She now is involved in the Faith Formation and Womenâ€™s Ministry in her parish, St. Thomas More, in Troy, Michigan.
Related Posts